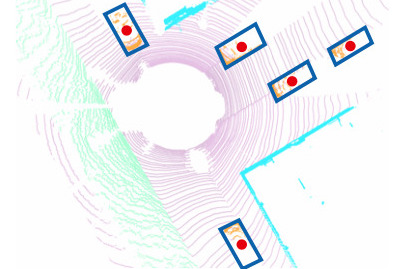 Three-dimensional objects are commonly represented as 3D boxes in a point-cloud. This representation mimics the well-studied image-based 2D bounding-box detection but comes with additional challenges. Objects in a 3D world do not follow any particular orientation, and box-based detectors have difficulties enumerating all orientations or fitting an axis-aligned bounding box to rotated objects. In this paper, we instead propose to represent, detect, and track 3D objects as points. Our framework, CenterPoint, first detects centers of objects using a keypoint detector and regresses to other attributes, including 3D size, 3D orientation, and velocity. In a second stage, it refines these estimates using additional point features on the object. In CenterPoint, 3D object tracking simplifies to greedy closest-point matching. The resulting detection and tracking algorithm is simple, efficient, and effective. CenterPoint achieved state-of-the-art performance on the nuScenes benchmark for both 3D detection and tracking, with 65.5 NDS and 63.8 AMOTA for a single model. On the Waymo Open Dataset, CenterPoint outperforms all previous single model methods by a large margin and ranks first among all Lidar-only submissions.